A drought index based on river flows

Figure 1: River flows for the Selwyn River in Canterbury, representative of the South Island east coast. The RDI reached a peak of almost 6 at the start of 1999, highlighting the major drought of 1998–99 and its relative severity.
Click to enlarge

Figure 2: Flows from Lake Wanaka between 1970 and 2002, representative of flows through the major South Island hydro-electric stations. The 1992 hydro drought had a peak RDI value at Lake Wanaka of 2, but the peak RDI for the longer drought that ended in 1978 was more than 7. From 1945 to 1978 there were nine droughts at Lake Wanaka that had a higher RDI than the drought of 1992.
Click to enlarge

In contrast to natural hazards, such as floods and earthquakes, the onset of a drought is slow and unspectacular, but its effects can be severe, as with the effects over the last decade on urban water supply, energy generation, and the pastoral industry. Drought is by far the most costly natural hazard in New Zealand.

Recent droughts and their impacts include:

Droughts cover large areas and long time periods and are difficult to summarise succinctly and assess for severity in comparison with previous droughts. They affect different parts of the economy in different ways, and there are many different ways of characterising drought severity. A drought index based on river flow has the advantage of adding up the effects of low rainfall and soil moisture deficit over the area of a river catchment, and accounts for effects of enhanced evaporation caused by higher temperatures. It can be updated regularly, and normalised for comparison between rivers.

A drought can be defined as a period when the river flow is less than an expected value. During a drought, the index is increased by the amount of the flow deficit (the difference between the recorded flow and the flow expected for the time of year). The River Drought Index (RDI) indicates the severity of the drought. For example, an RDI of 3 indicates that flow was less than that expected for the time of year, by an amount exactly equal to the long-term expected value, for 3 months, or by half that amount for 6 months, etc. Growth of the RDI will provide an indicator of drought development. Monthly maps of the RDI using the flow data supplied for page 2 of The Climate Update can be developed to show drought growth in both intensity and spatial extent. 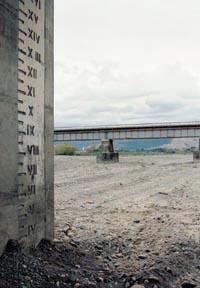 Dry bed of the Otaki River, March 2003, as seen at the bridge west of SH1. (Photograph: Alan Blacklock)