The end of a mild, mainly dry winter

August was settled, and drier than normal in many inland and western regions, but wetter than usual in some areas exposed to the east. Temperatures were near or above average in most places, the exception being parts of Central and south Otago.

Dry in many places

Central and western areas of the North Island from Waikato to Kapiti had less than half their normal August rainfall. Levin recorded only 19 mm, its lowest August total since records began in 1895. Tara Hills in the Mackenzie District received less than 10 percent of its normal August rainfall. In contrast, it was wetter than normal in Northland, and in the east from Gisborne to north Canterbury. Whakatu in Hawke’s Bay recorded 259 percent of normal August rain, its second wettest since 1983, with two-thirds of the rain falling in a storm between 20 and 24 August. The same storm also brought heavy rain to Northland, Coromandel, and the southern Wairarapa coast on 21 and 22 August.

Sunny and crisp in the South

Southland had well above average sunshine hours, with Buller and Westland also sunnier than average. Northland had less than normal sunshine, while the other regions were near normal.

Parts of Otago had mean temperatures more than 1 °C below the August average. Heavy ground frosts of –12.2 °C were recorded at Ettrick on 14 August, and –10 to –12 °C in several parts of inland Canterbury and Otago. Cold south-easterlies brought snow to Canterbury and Otago on 11–13 and 20–22 August, with snow settling to 400 m. Temperatures were also below average in Northland, southern Hawke’s Bay and, Whanganui.

It was 1.5–2.0 °C warmer than average in south Westland and Fiordland, and at least 0.5 °C above average in Nelson, western Southland, Wellington, Rangitikei, northern Taranaki, coastal Waikato, Auckland, and Bay of Plenty. 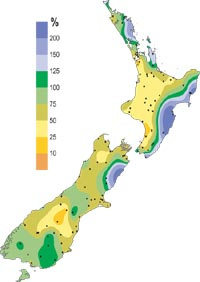 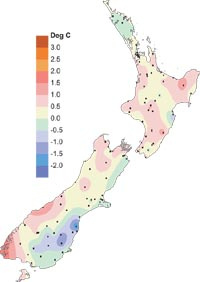 Difference from the average air temperature in degrees Celsius for August 2003. Click to enlarge.