The Equatorial Pacific atmosphere and ocean surface conditions suggest that the El Niño-Southern Oscillation (ENSO) was in a neutral state in August. The current neutral conditions are likely to remain through to the end of summer 2004.

The current three month value of the SOI is –0.5, while the SOI at the end of August was –0.4. La Niña or El Niño typically have an observable effect on the New Zealand climate when there is a large departure of the SOI from zero.

The Southern Oscillation Index (SOI), a measure of changes in the atmospheric pressures across the Pacific, smoothed over three months. The current three month value of the SOI is –0.6, while the SOI at the end of July was +0.3. La Niña or El Niño typically have an observable effect on the New Zealand climate when there is a large departure of the SOI from zero. 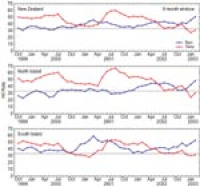 Climate forecasts, like all predictions of the future, are inherently uncertain. Chaos in the weather renders about half of New Zealand seasonal climate variability completely unpredictable. Hence, seasonal outlooks for New Zealand (or anywhere else) must reflect uncertainty and can never be completely categorical. The NCC outlooks convey this by predicting the probability of a set of three tercile outcomes for each element and region. That is, we predict the chance that the coming season’s climate will fall into the lowest third of the historical record (coolest, driest; “below normal”), the middle one third (“near normal”), or the highest one third (warmest, wettest; “above normal”).

A simple measure of accuracy is the “hit rate”, the fraction of times the tercile predicted with the highest probability actually occurs. Skilful forecasts should have a hit rate near 100 percent. If we are predicting one of three tercile outcomes, a complete guess would get the right answer one third (33 percent) of the time. Given the unpredictability mentioned above, a hit rate of about 70 percent is about the best that can be achieved on theoretical grounds.

We have taken the full period of The Climate Update outlooks and scored the forecasts, using a moving nine-month window, to show how forecast accuracy varies in time. The figure shows the hit rate for rainfall and temperature forecasts, for New Zealand as a whole and for the North and South Islands, in successive nine-month periods. The dates assigned correspond to the middle month of each period. Note that skill for river flow outlooks is similar to that for rainfall.

There are a number of interesting features. Temperature forecasts are generally more skilful than those for rainfall, as New Zealand temperature is more closely related to the El Niño-Southern Oscillation (ENSO) cycle, especially in the North Island. The overall hit rate is about 45 percent, but there have been prolonged periods above 50 percent. The drop in skill in late 2000 corresponds with the end of La Niña conditions. The recent drop in skill occurred during the last El Niño, an event that exhibited decidedly non-El Niño-like climate patterns over New Zealand.

Rainfall forecasts have been improving over time. In the first year, the hit rate was down about the 33 percent no-skill mark, but more recently it has consistently been between 40 percent and 50 percent. Rainfall is most skilfully forecast over the South Island, while the reverse is true for temperature. This effect is probably because of the strong dependence of South Island rainfall patterns on the westerly winds and their interactions with the steep topography. Seasonal changes in the westerlies show some predictability. Conversely, temperatures in the north are more strongly influenced by ENSO, and are therefore more predictable on average. 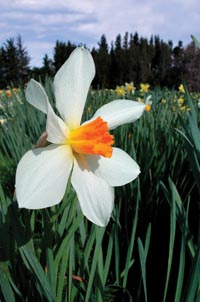 Spring daffodils at Middle Run Estate near Carterton, Wairarapa. Each year the public can pick flowers in return for a donation to charity. (Photograph: Alan Blacklock)