July was colder, sunnier, and more settled and frosty than average, with well below normal rainfall in most areas. July climate patterns were associated with more anticyclones (‘highs’) than average over New Zealand and in the Tasman Sea. As a result, winds were mostly light during the month, and there were low nighttime temperatures, and above average sunshine in most regions.

A very cold southerly outbreak brought significant snowfall to sea level in the eastern South Island on 4–5 July, with heavy snowfall settling to 300–500 m in the central and eastern North Island on the 5th. Severe overnight ground frosts followed for several days, especially in the South Island.

Mean and minimum temperatures were below average over much of New Zealand, although it was warmer than average in parts of inland and Central Otago. The July national average temperature of 7.3 °C was 0.4 °C below average. There were more ground and air frosts than usual in many areas, especially in the south and west of the North Island, the Central Plateau, and parts of the north and east of the South Island. Severe ground frost of -6.0 °C or lower occurred somewhere in New Zealand on most days of the month. Levin recorded 22 ground frost days, which was 10 more than normal. 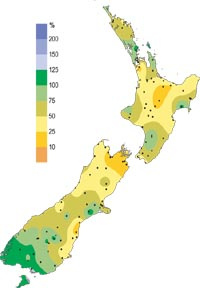 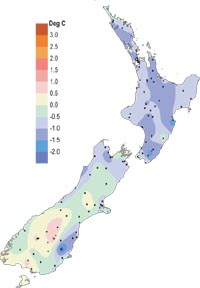 Difference from the average air temperature in degrees Celsius for July 2003. Click to enlarge.