The Equatorial Pacific atmosphere and ocean surface conditions suggest that the El Niño-Southern Oscillation (ENSO) has moved into a neutral state in July, apparently ending the short-lived cooling (relative to normal) in sea surface temperatures that developed in May.

Most climate forecast models indicate there will be neutral conditions over the next 3 months. All models predict a neutral ENSO state by the end of 2003 and into early 2004.

Further information on ENSO is available on the World Meteorological web site.

Mean sea surface temperature departures from normal for July 2003. The New Zealand region average SST anomaly has been positive for all of 2003 so far. The anomaly for July was +0.7 °C, with the May-to-July mean about +0.6 °C. Although anomalies are positive generally, SSTs are below average about and south of the Chatham Rise. Reproduced courtesy of NOAA/Climate Diagnostics Center.

The Southern Oscillation Index (SOI), a measure of changes in the atmospheric pressures across the Pacific, smoothed over three months. The current three month value of the SOI is –0.6, while the SOI at the end of July was +0.3. La Niña or El Niño typically have an observable effect on the New Zealand climate when there is a large departure of the SOI from zero. 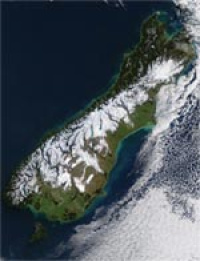 As shown on our cover image the severe storm of 4–5 July left widespread snowfall. The NASA image below shows the extent of the snow on the South Island a few days later on 11 July.

The snow followed the development at the end of June of a deep depression to the south of New Zealand which persisted for a number of days and caused a very cold southerly air flow onto the country. The cold air was trapped against the Southern Alps, while the convergence of warm moist air above caused precipitation in the form of snow.

Snow is one of winter’s most valuable commodities, providing everything from snow-based recreation to the recharging of lakes and aquifers. The seasonal maximum of the quantity of water stored in snowpack in the hydroelectric catchments is similar to the volume of water that can be held in controlled hydroelectric lake storages.

Snow records in New Zealand are often more descriptive than quantitative. For example, there are records in some locations of the number of days of snowfall but rarely are there good records on the depth of the fallen snow.

NIWA is working with Otago University and Otago Regional Council to quantify just how much snow there is. The key objective is to find out how much water there is in the snow because, apart from the ski industry, it’s the potential water storage in the snow that is important. This information will have important benefits for planning water use, particularly in hydro-electric production and water supplies for industry and urban use.

A technique has been developed to estimate the build up of snow during the cool months, and find out how this varies in quantity and timing from year to year. The Selwyn River and the Malvern Hills in mid Canterbury on the afternoon of 6 July 2003, looking south from an aircraft departing for Australia. The Canterbury Plains and eastern ranges of the Southern Alps are in the background. (Photo: Dr Andrew Black, University of Dundee.)