Low SOI does not signal an El Niño

The Southern Oscilliation Index dropped surprisingly to –1.4 during June indicating a subtle change in developments from the movement towards La Niña like conditions that was evident in May.

Meanwhile, sea surface temperatures (SST) in the eastern tropical Pacific along the Equator fell to a degree below normal during May and June. This is consistent with the development of a La Niña event.

Despite the uncertainties, there is general agreement among climate models that the development of an El Niño is very unlikely during the rest of this year. Further general information on El Niño is available on the World Meteorological Organization website.

Higher than normal May and June temperatures are a reminder that meeting winter chilling (also known as vernalization) demand for subtropical crops is always uncertain in New Zealand.

Winter chilling is the period of cold weather that subtropical crops require during their winter rest period, prior to commencing new growth in spring. Typically, the most effective chilling temperatures are between about 3 °C and 7 °C. Conditions colder than freezing do not assist chilling, and at temperatures above 15 °C, the chilling process is reversed. Northern regions of New Zealand often do not get enough cold weather to complete the chilling.

There are various methods to calculate chill units, of which the two most common in New Zealand are:

The table on the left (table 1) shows the hourly temperature taken at Dunedin Airport on 12 June, 2003; the observed temperature is shown in the second column. The third and fourth columns show chill units for each hour by using the two methods mentioned above. The total chilling for the day, 11 and 11.1 units respectively, is almost the same in each case. Temperatures this year in May and June have been higher than average in New Zealand’s fruit growing regions. The adjacent table (table 2) shows chill unit accumulations (from both calculations) for May and June for the past 20 years, at Whakatu in Hawke’s Bay. The warmer years with low chill units (shaded yellow), are clustered from the late 1990s onwards, highlighting the increased frequency of mild winter months in recent years compared with 20 years ago 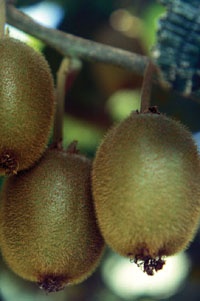 Kiwifruit approaching harvest quality. Winter chilling of subtropical crops is likely to be below normal this year. (Photograph: Alan Blacklock)