May temperatures above average

May was much warmer than average over most of New Zealand. The May national average temperature of 11.6 °C was 1.1 °C above normal, the warmest since May 2000.

Farewell Spit recorded its highest mean temperature (13.7 °C) since records began in 1971, while Hanmer’s temperature for the month was 2.2 °C above its historical May average.

Higher rainfall than in April

Rainfall was close to normal or above normal in large areas of the country, in contrast to the predominantly dry conditions of April. Conditions were wetter than average throughout northern Northland, King Country, Tongariro-Taupo, Hawke’s Bay, and the west coast of the South Island. Rainfall was twice the average at Cape Reinga in the far north and in parts of Hawke’s Bay. However, totals were less than a third of average in parts of southern Wairarapa, north Canterbury, coastal Otago and inland Southland.

Sunshine hours were well above average in coastal areas of Southland and Otago, and in Wellington. 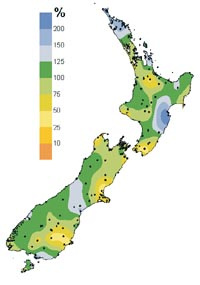 Percentage of average rainfall for May 2003 (recording sites shown with dots). Click to enlarge. 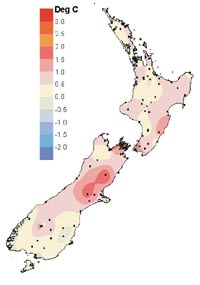 Difference from the average air temperature in degrees Celsius for May 2003. Click to enlarge.