Most of the South Island west coast and some alpine areas recorded just a third of normal rainfall in April. Only half normal rain fell in most other western regions from Waikato to Fiordland, as well as in central Wairarapa, Wellington, central Marlborough, Otago, and Southland. It was drier than normal also in south Auckland, Taranaki, and King Country. Reefton recorded its lowest April rainfall total since records began in 1961.

A few areas of the country were wetter than average, particularly the Bay of Islands, parts of Auckland, Coromandel, areas of Bay of Plenty, southern Marlborough, Banks Peninsula, and coastal Canterbury.

Cool in the south east

Parts of the country from southern Wairarapa down the east coast of the South Island to Southland recorded mean temperatures for the month of more than 1.5 °C below normal. Elsewhere in New Zealand temperatures were near average or above. The national average temperature of 12.9 °C was 0.4 °C below normal.

April’s climate pattern was dominated by more frequent anticyclones than usual to the south and southwest of New Zealand, with more frequent centres of low pressure to the north of the North Island. These systems produced more 'dry' easterly and southeasterly winds than usual over New Zealand. 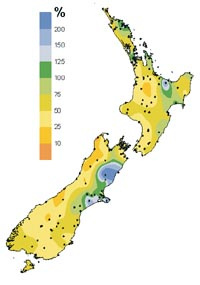 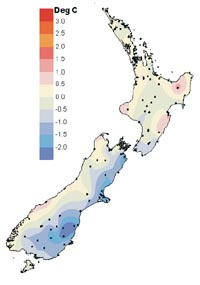 Difference from the average air temperature in degrees Celsius for April 2003. Click to enlarge.