The current warm phase of the El Niño-Southern Oscillation has ended and is not expected to influence New Zealand’s climate over the next few months.

Most forecast models of the development of the El Niño-Southern Oscillation are predicting neutral conditions through late autumn and winter.

Sea surface temperatures around New Zealand were above average at the end of the month.

The mean Southern Oscillation Index (SOI) for April was -0.6, with the three month average now at -0.8. Further general information on El Niño is available on the World Meteorological Organization website. 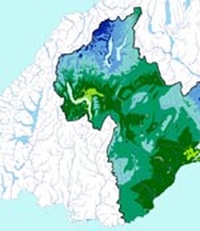 Images of the drought 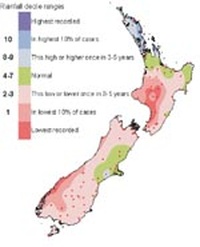 Water level indicator and exposed bed of the Otaki River. 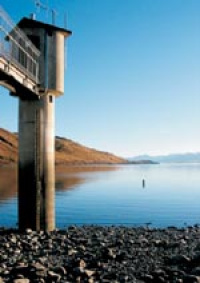 Relatively, and in several cases extremely, dry conditions have persisted in some regions of New Zealand for much of this year. Parts of the southwest of the North Island and of the west coast of the South Island have recorded rainfalls for this year so far that are the lowest for at least 30 years (see graph left).

Total rainfall for the past three months (February-April) at Milford Sound was the lowest since at least 1930, when rainfall recording began.

The drought affected areas include the main hydroelectric catchments – Lake Taupo in the North Island, and the Waitaki, Clutha, and Waiau catchments in the South Island.

Lake Tekapo, the Otaki River, and the Waikanae River on the Kapiti Coast, were still at unusually low levels in early May. View upstream of the Waikanae River from the water level gauging station. The river is the main supply source for the Kapiti Coast, where water supplies were still very low in early May. Photograph: Cathy Blacklock