New Zealand’s climate during March was dominated by anticyclonic conditions, bringing unusually dry and sunny weather to most areas apart from the north of the country. For many localities it was a continuation of already unusually dry summer conditions.

Lower than usual pressures to the north of the country strengthened northeasterly air flow over New Zealand with resulting high rainfalls in North Auckland, Auckland, Coromandel, and Gisborne. Dry conditions in parts of Canterbury were alleviated by rainfall at the end of the month.

Much of the country recorded higher than normal air temperatures, particularly in the Southern Lakes district and Central Otago. Overall, New Zealand was warmer in March than in January or February, with the late onset of summer-like conditions

The high March temperatures were matched by higher than normal radiation and hours of bright sunshine. 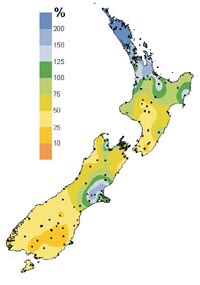 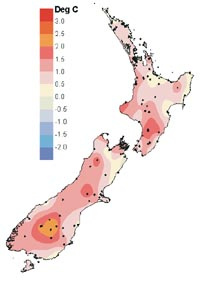 Difference from the average air temperature in degrees Celsius for March 2003. Click to enlarge.