The current warm phase of the El Niño-Southern Oscillation is nearing its end and is not expected to influence New Zealand’s climate over the next few months.

Most forecast models of the development of the El Niño–Southern Oscillation are predicting neutral conditions through late autumn and winter.

The mean Southern Oscillation Index (SOI) for March was –1.0, with the three month average now at –0.7. The present El Niño continues to wane. Further general information on El Niño is available on the World Meteorological Organization website. 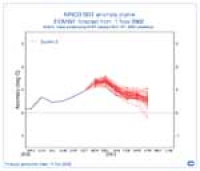 Current drought severe, but not unprecedented

Many regions of New Zealand have experienced severely dry conditions over the last few months. Droughts are difficult to define because of the many contributing causes and effects. Key questions are the nature of user requirements, the time of year of the low rainfall, and how often similarly dry conditions might occur.

The rainfall record since 1896 for Levin, shown in the figure to the right, suggests that the dry conditions during January to March this year have occurred only twice before (although there are some years missing from the record).

The widespread nature of the current drought has meant that hill and mountainous regions, catchments for many rivers and streams, have had similarly low rainfalls, with consequent low river flows. A diminishing stream in Ohariu Valley in the southwest of the North Island. Flows in many local streams almost ceased during one of the driest summers on record. Photograph: Alan Blacklock 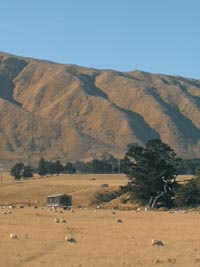 Drought scene typical of recent conditions in the southwest of the North Island. Photograph: Alan Porteous