Waikato, Taranaki, and Nelson all received less than a quarter of their normal February rainfall, while less than half of the average fell in the far north of Northland, and in most central and southwestern areas of the North Island. Totals were less than 75% normal in southern Wairararapa, north Canterbury, and west Otago. In some northern and eastern North Island regions the dry conditions were relieved by heavy rainfall towards the end of the month, with flooding in Paeroa.

February was cooler than average over the country, particularly in western regions. Unseasonably early frosts, extreme in some areas for February, occurred in inland and eastern regions between the 20th and 23rd.

February was sunnier than average over much of New Zealand, with extremely high sunshine and solar radiation totals recorded in many eastern locations from Hawke’s Bay to Southland.

he February climate was influenced by more frequent than usual anticyclones (high pressure zones) in the Tasman Sea and east of the Chatham Islands. Westerlies were stronger than usual south of New Zealand as were easterlies to the north. This pattern produced more frequent onshore winds over the country. 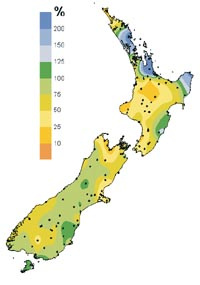 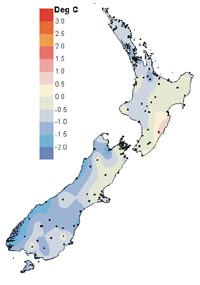 Difference from the average air temperature in degrees Celsius for February 2003. Click to enlarge.