Rainfall was at least 150 % of average in Northland, Auckland, Coromandel, and western Bay of Plenty, and double average in eastern parts of Northland and Coromandel. Whitianga recorded its highest January rainfall since records began in 1991. Surface flooding on the Coromandel Peninsula created washouts in holiday parks, disrupting the plans of many campers.

Cool in most places

It was a cool month with below average temperatures in many areas. Temperatures were at least 1 °C below normal in parts of Northland and Waikato. Most of the South Island was near normal, but it was cooler than average in Westland. The national average temperature of 16.4 °C was 0.6 °C less than the 1961-90 normal.

A sunny January for the south

Sunshine and solar radiation totals were above average in Marlborough, Canterbury, the west of the South Island, and the south west of the North Island. They were below average in Northland and the Bay of Plenty, with near average totals elsewhere. 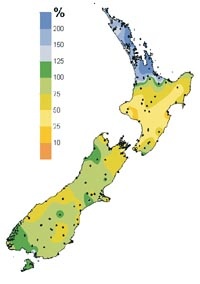 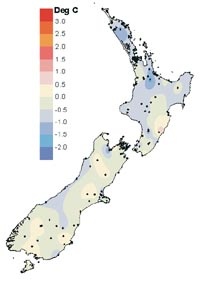 Difference from the average air temperature in degrees Celsius for January 2003. Click to enlarge.