Rain in early December meant rainfall was above average for the first time in six months in central Marlborough, but below average rainfall continued in eastern regions from Northland to Otago. In contrast it was cloudier and wetter than usual in some western districts.

Sunny in the east

Sunshine hours were above average in many eastern regions from Hawke’s Bay to Southland, but below average in the western North Island from Auckland to King Country.

Snow lay at the Homer Tunnel on 26 December and visitors to Whakapapa at Christmas were skiing and snowboarding.

A warm, humid, easterly airflow cooled over cold water through Cook Strait caused persistent fog which closed Wellington Airport for most of 2–4 December, disrupting travel for thousands. Wellington also experienced significant thunderstorms, with frequent lightning, for almost an hour just after midnight on the 8th. 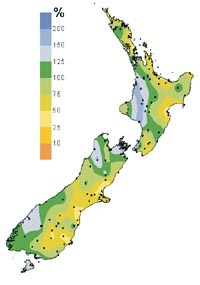 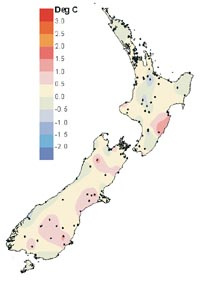 Difference from the average air temperature in degrees Celsius for December 2002. Click to enlarge.