Cold and windy, and relatively dry in many places, November conditions overall were generally uncharacteristic of spring.

Air temperatures were more than 2.0 °C below normal in central and northern parts of the North Island, and in parts of central and eastern Otago. Taumarunui at 12.2 °C, and Gore at 9.4 °, both recorded their coldest November mean temperatures on record.

Low rainfall in many areas

Rainfall was below average for the fifth consecutive month in central Marlborough, and was 50% or more below average in Northland and Bay of Plenty.

Gale force northwesterlies with gusts up to 130 km/h buffeted Wellington on 1 November, and there were more strong winds later in the month. Spectacular lightning was observed over Northland, Auckland, and Coromandel on the night of 1-2 November.

Hailstorms brought severe damage to crops around Motueka on 17 November, with estimates of export losses put at $20 million. 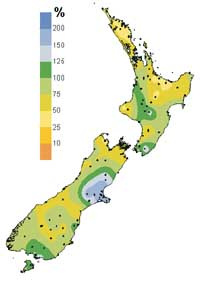 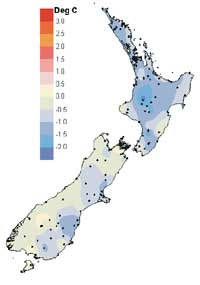 Difference from the average air temperature in degrees Celsius for November 2002. Click to enlarge.