The orange-yellow shading along the equator, stretching west from Ecuador, is a typical 'footprint' of the El Niño phase of the El Niño -Southern Oscillation. The shading indicates that sea surface temperatures in the area are 1-2 °C or more above normal. The grey-blue shading around New Zealand shows below normal sea surface temperatures, which is also characteristic of El Niño.

An unusual feature of the current situtation is the higher than normal sea surface temperatures around the Antarctic.

The mean Southern Oscillation Index (SOI) for November was -0.8, with the three month average now at -0.9. The present moderate El Niño is expected to last through summer, and is likely to be weaker than the 1997-98 event. Further general information on El Niño is available on the World Meteorological Organization web site, www.wmo.ch 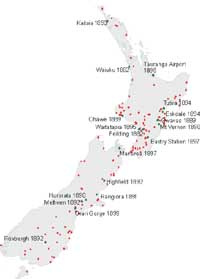 Rainfall stations that opened in the 19th century. 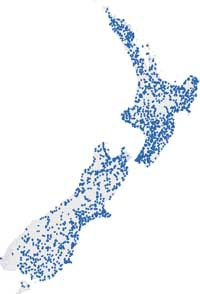 Locations of closed rainfall stations for which observations are held on the National Climate Database. 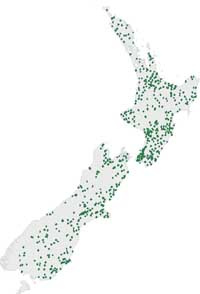 Locations of stations which are open and currently reporting.

Rainfall has been measured in New Zealand for over 150 years. The earliest recorded observations held by NIWA date from January 1853, and were made by the Royal Engineers at the Albert Park Barracks in Auckland.

The rainfall recording network from which data are archived on the National Climate Database is illustrated here. Rainfall stations at any given location need to report continuously for at least 20-30 years for a reasonably reliable understanding of the features of the rainfall pattern at that site to be built up. Records from shorter term stations can be compared to longer nearby records to improve information at the short record sites. Stations with long records (50 years or more) help build a picture of long-term climate variability and change.

The three figures here show sites that currently measure rainfall or have measured rainfall in the past. Rainfall is also observed in other NIWA networks, and by local authorities around New Zealand. 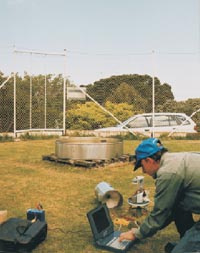 Kevin McGill of NIWA downloading data from the logger of an automatic rain gauge at the climate station at Kelburn, Wellington. Electronic gauges record the timing and intensity of rain as well as total precipitation. An evaporation pan in the background measures water loss to the air. (Photo: Alan Blacklock)