Overnight minimum temperatures were more than 2 °C below normal in many places. Ground frosts occurred with twice their normal frequency in inland parts of Bay of Plenty and Canterbury.

The cold October was a marked turn around from September, when temperatures were above normal over much of the country.

Apart from north of Gisborne, and coastal Southland, rainfall was below average. Many North Island localities recorded less than 75% of normal, as did parts of the northern South Island and inland Otago. Rainfall was below average for the fourth consecutive month in central Marlborough, with 50% of normal. Similar rainfall departures were recorded in Bay of Plenty and the southern tip of the North Island.

Hail the size of golf balls caused widespread damage in Hornby, near Christchurch, on 27 October. 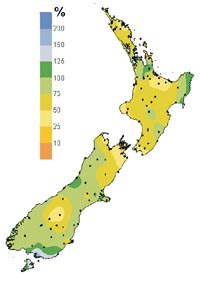 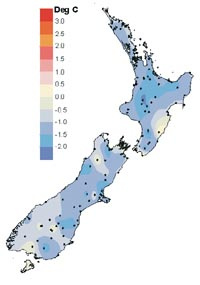 Difference from the average air temperature in degrees Celsius for October 2002. Click to enlarge.