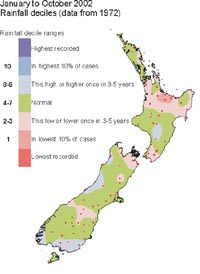 The mean Southern Oscillation Index (SOI) for October was -0.9, with the three month average now at -1.2. The present moderate El Niño is expected to last through summer, and is likely to be weaker than the 1997–98 event. Further general information on El Niño is available on the World Meteorological Organization web site, www.wmo.ch.

Blowing the other way – for the moment

"We have been watching the developing El Niño conditions very closely, and now that El Niño is with us, the westerly winds on the Hauraki Gulf appear to be doing exactly what we thought they would do," said Roger Badham, meteorologist for Team New Zealand. 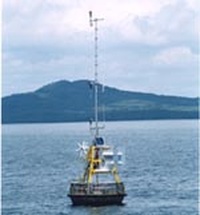 The NIWA meteorological buoy deployed on the America’s Cup course in the Hauraki Gulf.

"These El Niño conditions are certainly making this spring and early summer very different to anything experienced in the leadup to the last America’s Cup, when we had strong La Niña conditions and a high frequency of northeasterly winds.

"The Louis Vuitton series has suffered quite a number of lost days from strong westerly winds. We have had strong zonal flow across all New Zealand with active fronts and troughs crossing almost daily. As well, the Louis Vuitton race series committee lowered the wind speed for abandoning the starting of a race from 23 knots down to 19 knots. There is no doubt that the lower wind speed has reduced the damages that were witnessed last time. However, westerly winds come directly offshore, with only a few miles of fetch, and the associated seas are reasonably flat. As a consequence, the wind limit has been somewhat controversial. Certainly, the sea conditions with the same strength northeasterly winds were, on some occasions, much more dangerous, with one to two metre high waves.

"Even if the El Niño conditions continue through until March, we won't be able to infer as much about the winds in the race area during the Amercia’s Cup final as we were able to during the Louis Vuitton series. There is a strong correlation between a negative Southern Oscillation Index (El Niño) and strong westerly winds prior to the New Year from October to December. However, that correlation decreases rapidly during January with little signal in the late summer period. So the America’s Cup period in the second half of February may still be influenced by a couple of strong westerly fronts, but, in between, the winds will be lighter with both west coast and east coast sea breezes." 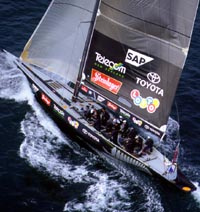