Warm in the east

Daytime maximum temperatures were between 2.0 and 3.0 °C above normal in many eastern areas from Hawke’s Bay to Otago. The mean maximum temperature at Napier was 19.7 °C, which is the highest recorded since records began in 1870. Christchurch Botanical Garden reached 18.1°C, and was the highest since 1864. Records for September were also set at Kaikoura, Timaru, and Dunedin.

Dry in the east and wet in the west

Rainfall from Marlborough to north Canterbury was below average for the third consecutive month. It was also below average in eastern Northland, Waikato, other eastern areas from western Bay of Plenty to Otago, and isolated areas of inland Southland. In contrast, it was unsettled with above average rainfall in all South Island Alpine regions, Fiordland, coastal Southland, Southern Lakes and parts of Buller and Westland, as well as Taranaki and King Country.

Sunny in the east, cloudy in the west

Sunshine and solar radiation totals were above average in eastern regions from Gisborne to Southland. In many western areas from Taranaki to Fiordland it was cloudier than usual.

A wild start to spring

On 12 September a heavy hailstorm in Wellington’s eastern suburbs at about 7 am closed the airport temporarily. Later the same day heavy hail fell in Takaka. Severe northwest gales buffeted Canterbury on 22 September, with wind gusts to 117 km/h at Rangiora and 115 km/h at Darfield. 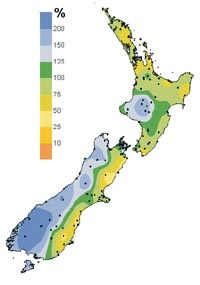 Difference from the average air temperature in degrees Celsius for September 2002. Click to enlarge.