Most of New Zealand has received near normal rainfall. Parts of Waikato, Bay of Plenty, south Wairarapa, and Marlborough have been drier than average. Parts of Manawatu, Westland, Southland, and Otago have been wetter than average. 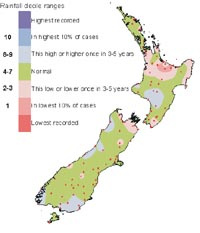 The mean Southern Oscillation Index (SOI) for September was -0.9, with the three month average now at -1.2. The present moderate El Niño is expected to be weaker than the 1997-98 event. Further general information on El Niño is available on the World Meteorological Organization web site, www.wmo.ch. 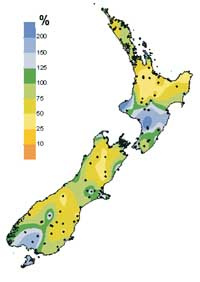 In the meteorological context, the term teleconnections is used to refer to linkages between climate variations in one part of the world and associated climate signals in other parts. NIWA climate scientists are working to improve understanding of teleconnection cause and effect in order to achieve better climate forecasts for New Zealand.

Teleconnections can be defined as "the linkages over great distance of seemingly disconnected climate anomalies". In other words, when the climate varies in one place there is also a consistent variation in perhaps another ocean or continent, without any obvious physical link. These connected variations, which may occur together or with a time delay, are usually identified statistically. Then, because we recognise that some atmospheric processes are manifested as waves, we can begin to understand the connections in qualitative terms ("when this happens, look out for that effect"). This is like dropping a stone in the middle of a pond, and sometime later seeing small waves lap the shoreline.

New Zealand climate is strongly influenced by local sea surface temperatures (SSTs) and winds – these are not teleconnections. A large proportion of the variability in regional seasonal temperatures in New Zealand is linked to the local SST for the same season. These contemporary correlations tend to be strongest for the northern and western regions, and weakest (but still significant) in all regions in winter.

Tercile probabilities of winter rainfall in the west and south of the South Island for a cold and a warm Indian Ocean.

Elsewhere in the world, there are also local SST-atmosphere interactions that exhibit persistence. If such effects are strong and long-lasting, they can propagate out of the region where they began. The best known such example of this is the El Niño-Southern Oscillation. There are many examples of ENSO teleconnections – during El Niño, it tends to be dry in northeast Brazil and in southern Africa, with a poor monsoon season in India.

A teleconnection that is not as well understood but also appears to affect New Zealand is one from the Indian Ocean. Increased sea temperatures in the southern subtropics northwest of Australia in autumn and winter appear to be associated with enhanced cloudiness over Australia (the "north-west cloudband") in winter. Also in winter there are downstream anomalies in the Tasman-NZ region:

During winter 2002, Indian Ocean SSTs were above average and so was rainfall in the west and south of the South Island. 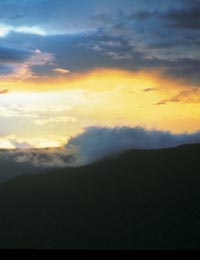