Despite a cold, wintry outburst during the last week, August was warmer than usual, especially in the South Island. The national average mean temperature of 9.2 °C was 0.5 °C above normal.

Temperatures were near average in north Westland, the central North Island, parts of Northland, and scattered areas of Central Otago and inland Southland.

July and August were both drier than normal in the northeast of the South Island and in Canterbury, with rainfall about 50% of average or less, and in Bay of Plenty, which had less than 75% of normal rain.

However, there was above average rainfall in Southland, Fiordland, Southern Lakes, and parts of Central Otago. Rainfall was also above average in the southwest and the northeast of the North Island. Heavy, intense rainfall around and to the north of Gisborne caused surface flooding and some severe damage to hill country properties on 6 June.

August’s climate pattern was dominated by more frequent than normal southwesterlies over mainland New Zealand, with below average pressures about and east of the Chatham Islands. 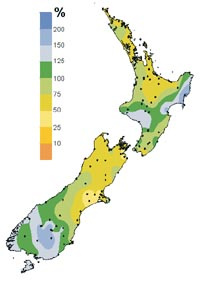 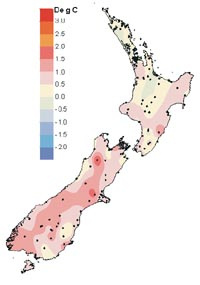 Difference from the average air temperature in degrees Celsius for August 2002. Click to enlarge.