Wet in the north; dry in the south

Rainfall in northern and eastern North Island regions was well above normal, with Napier recording more than double its July average. Flooding occurred at Te Awamutu on 5 July, Te Kuiti and Mangakino on 8 July, Kaukapakapa on 11 July, and Mercer on 12 July when the Waikato River flooded farmland already saturated by weeks of wet weather. Snow on 15 July closed central North Island roads.

In contrast, it was dry over much of the South Island, particularly Nelson, Marlborough, Canterbury, and Central Otago, with many places having less than a quarter their average rain. Lauder and Motueka equalled their lowest rainfall since records began at those sites, with just 1 mm in the case of Lauder.

Sunshine and solar radiation were well above average in coastal Southland, and it was sunnier than normal in Otago, Buller, and Westland. 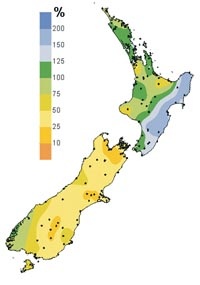 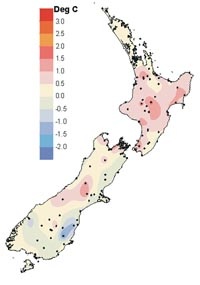 Difference from the average air temperature in degrees Celsius for July 2002. Click to enlarge.