Large areas of New Zealand have received near normal rainfall. Parts of Waikato and Bay of Plenty, and the north and southwest of the South Island have been drier than average. 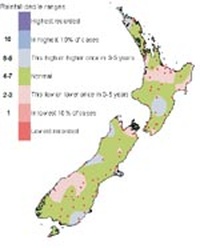 The mean Southern Oscillation Index (SOI) for July was -0.8, with the three month average now at -1.0. A moderate El Niño is now in place, but its affect on New Zealand climate during spring is expected to be weaker than in 1997-98. Further general information on El Niño is available on the World Meteorological Organization web site

The Southerern Oscillation Index (SOI), a measure ofchangesin the atmospheric pressures across the pacific, smoothed over three months.

Many agricultural and horticultural crops in New Zealand have their production potential lowered by frost damage. In frost-susceptible areas, such as the Otago region shown in the figure below, a thorough knowledge of the frequency and timing of frosts is necessary to minimise the risk of frost damage.

Minimum air temperature data recorded at climate stations are used to assess frost risk. However, the frost risk may be significantly different at a location only a few kilometres away from a climate station, due to a change in altitude, aspect, slope, or land cover.

In conjunction with the Otago Regional Council’s GrowOtago project, NIWA scientists have combined satellite pictures with minimum air temperature data from climate stations to produce detailed frost maps for the entire Otago region. The maps show information about the length of the frost-free period and the timing of first and last frosts. 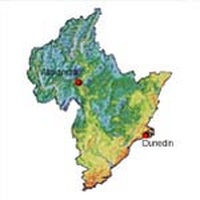 The images used are from satellites that measure the amount of infrared energy being emitted from the surface of the earth. The infrared radiation sensed by the satelite is translated into a colour spectrum that can be interpreted. On cold winter nights with no cloud cover, the patterns of infrared temperature indicate how susceptible places are to frost. Areas that display lower temperatures receive frosts earlier in the autumn and later in the spring. In the figure below, such areas, shown in blue and green shading, are in the broad inland valleys and on top of the mountain ranges. Coastal areas and river valleys display higher temperatures and have lower frost risk in the autumn and spring. These areas appear in yellow and orange shading on the map.

Putting images and data together

Frost risk calculated from the climate station data is related to the data that the satellite images show over the ground observation sites. This procedure enables accurate interpretion of the satellite data in places where there are no ground-based measurements. In this way a picture of frost risk is built up over the whole Otago region. The information that is obtained like this is not just averages, such as the average length of the frost-free period. It also provides, for example, information on how late the last frost (or how early the first frost) will be at a reasonably practical level that helps risk assessment, such as a one in five year occurrence.

This enables users of the maps to identify the average risk, and the risks associated with the relatively rare events, which could mean the difference between the success and failure of a business. 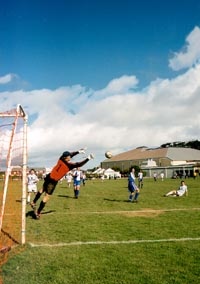