Although parts of the southwest and south of the South Island recorded near normal temperatures, Tara Hills broke the record for the coldest New Zealand June air temperature at -19.1 °C. Fairlie equalled its coldest June temperature since 1925 at -14 °C.

Rainfall in parts of South Auckland, Waikato, and Hawke’s Bay was near average or below.

Sunny in the southeast

Coastal Southland and Otago had above average sunshine hours. It was cloudier than usual in central, western, and northern North Island regions. 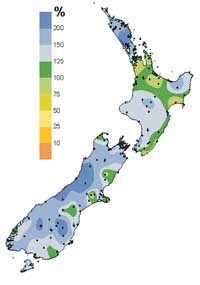 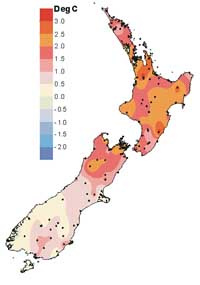 Difference from the average air temperature in degrees Celsius for June 2002. Click to enlarge.