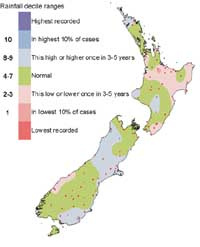 Total rainfalls for 1 January to 30 June 2002, shown according to decile rankings of all rainfalls for this period from 1972. Dots indicate observation sites used in the analysis.

The mean Southern Oscillation Index (SOI) for June was -0.8, with the three month average now at -0.9. El Niño is expected to develop by spring, but the magnitude of the event is still uncertain. The latest World Meteorological Organization press release on El Niño (22 June) can be viewed on their web site www.wmo.ch

The Southern Oscillation Index (SOI), a measure of changes in the atmospheric pressures across the Pacific, smoothed over three months. La Niña or El Niño typically have an observable effect on the New Zealand climate when there is a large departureof the SOI from zero.

In common with many cities world wide, and with some other New Zealand locations, Christchurch is subject to both meteorological and topographical influences that slow down and at times prevent the removal of air pollutants from the urban area.

A meteorological phenomena that affects Christchurch often during the cooler months is the inversion layer, a primary reason why polluted air is so often trapped over the city.

Christchurch suffers from more frequent winter night-time temperature inversions than many other places in New Zealand. Temperature inversions occur when there is little or no wind, and the sky is clear. Under these conditions, in the evening and during the night, heat from the ground is radiated into the atmosphere, and the air adjacent to the ground cools relative to the layer of air above. In this way the normal lowering of temperature with increasing height is temporarily reversed.

When this happens, the cool air near the ground, particularly in low lying areas, is trapped and is described as being strongly stable. This means pollutants suspended in the air at these times diffuse only very slowly, while larger particles are deposited on the ground and other surfaces.

A strong inversion can occur even when winds are moving above the stable surface layer. In this condition, the upper air layer is said to be decoupled or separated in such a way as to have little influence on the inversion layer.

Christchurch has two features that can reinforce the temperature inversion. Firstly, the topography of the area results in cold air draining off the Southern Alps and Banks Peninsula which adds to the pool of cold air over the city. Secondly, one of the favourable features of Christchurch, its low density of buildings compared to many cities, contributes to the problem. There is less heat stored in the urban area during the day, and therefore a more rapid cooling at night which accelerates the formation of the inversion layer.

During the period after sunrise, the surface of the ground is heated by the sun, creating near the ground a warm air layer which gradually increases in height. The buoyancy of this warm air causes it to mix vertically with the air above. Initially, this mixed layer creates a problem of fumigation, whereby air still trapped by the inversion layer can be mixed downwards, thus spreading pollutants that may have been hovering at chimney level down to the ground, creating very unpleasant conditions for a time.

Finally, as the heating of the sun continues, the mixed layer becomes deep enough to break down the inversion, and the pollutants disperse by convection (predominantly upward motion of the air) and as a result of horizontal air flow (often referred to as advection). Pollutant concentrations are generally lower during the late morning and early afternoon, when convective influences are strongest, and when there are fewer particles being introduced to the air from sources such as heating appliances.

Just before sunset, the heating of the ground surface stops, and the temperature inversion starts to re-establish near the ground. This cuts off the mixed layer from its source of heat, and it collapses. The process of pollutant concentration build up begins again.

The conditions described above occur only under clear skies and light winds. Cloud cover and windy conditions generally reduce the daily temperature range and increase turbulence. It is then more likely that the atmosphere near the ground at night will be less stable and provide more effective pollutant dispersion through mixing. 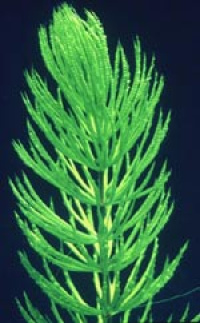 An inversion layer traps smog over Christchurch. The view of the Southern Alps from above the inversion layer is unaffected. The clear area in the foreground may be due to the drainage of cold, clear air from Banks Peninsula. (Photo Alistair McKerchar)