New Zealand Climate in May 2002

Summer to winter in one month

May air temperatures were above average for the first three weeks, even summer-like at times. Then on 23 May a deep depression tracked across the South Island bringing thunderstorms to many western areas. This was followed by wintry southwesterlies which battered coastal Otago and Southland between 25 and 28 May, with freezing conditions and snow to low levels. Despite this, mean temperatures for the month were 1.5 °C or more above the historical average in parts of Central Otago and in many northern North Island areas. Christchurch Botanic Gardens recorded a maximum temperature of 27.2 °C, the highest May reading since records began in 1864.

Rainfall was well below normal in eastern regions from Gisborne to Marlborough, and in parts of Canterbury, Central Otago, and the Southern Lakes. Timaru Airport recorded 6 mm, its lowest May rainfall since records began in 1949. It was also drier than normal from Manawatu to Wellington, and in Nelson.

Sunny in central and eastern regions

Gisborne and Wellington were sunnier than normal, being sheltered from the southwesterlies. Sunshine hours were lower than average in the upper half of the North Island and in Westland. 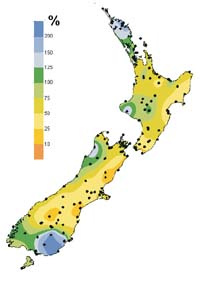 Percentage of average rainfall for May 2002 (recording sites shown with dots). Click to enlarge. 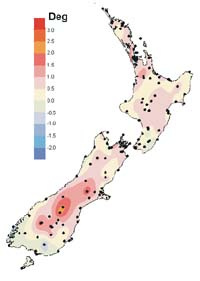 Difference from the average air temperature in degrees Celsius for May 2002. Click to enlarge.