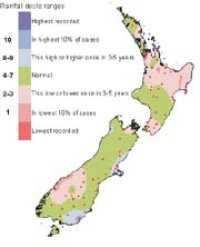 The mean Southern Oscillation Index (SOI) for May was -1.5, with the three month average now at about -0.9. A weak to moderate El Niño is expected to develop by spring.

The Southern Oscillation Index (SOI), a measure of changes in the atmospheric pressures across the Pacific, smoothed over three months. La Niña or El Niño typically have an observable effect on the New Zealand climate when there is a large departure of the SOI from zero.

Signs have strengthened over the past month that an El Niño event could affect New Zealand climate by spring. The best indication of how El Niño might affect spring air temperature in a locality can be found in the historial record of previous El Niño spring temperatures. This month we look at an example temperature record, using observations from Invercargill Airport.

The mean air temperature at Invercargill Airport during spring (September to November) is 9.9 oC. Since 1950 the mean temperature has varied from about 1.0 degree below average to 1.1 degree above.

The figure below shows the mean air temperature at Invercargill for each spring since 1950. The data are shown in blue, green, and red to illustrate the temperature departures in each of the lower, middle, and upper terciles. The vertical dashed lines mark the boundaries of the tercile ranges.

Spring air temperature departure from average at Invercargill Airport from 1950 to 2001.

The 11 springs since 1950 when there was an El Niño phase are labelled in the figure.

Eight of these 11 springs recorded lower tercile temperatures, suggesting that there is a better than 70% chance that an El Niño spring would be cooler than normal. Only twice was the spring warmer than normal.

While an El Niño is considered to be likely by spring, how strong the El Niño will be, and whether it will conform to typical El Niño weather patterns, are still uncertain. 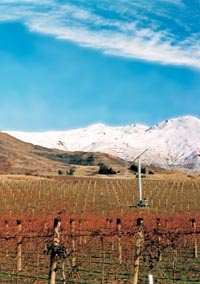