East-west divide in the south

Below average rainfall with above normal temperatures and abundant sunshine occurred in the west of the South Island, while the east of the island recorded above average rainfall and cooler than normal conditions.

Over much of the remainder of the South Island temperatures were near normal. Parts of coastal Southland and Buller were warmer than normal.

Much of the North Island was cooler than normal, with temperatures of 0.5 °C or more below average in many areas.

A few days of rainfall at the beginning and at the end of the month meant conditions were wetter than normal in coastal Bay of Plenty, the Central Plateau, Kaikoura, coastal Canterbury, and much of Otago. Elsewhere, rainfall was below normal and particularly low in south Taranaki, Horowhenua, Wellington, central Marlborough, Buller, north Westland and Fiordland.

Cold southerlies and southeasterlies at the start of April brought early snowfalls to high country areas, and huge swells damaged roads and property in some eastern coastal regions. 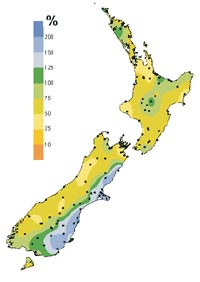 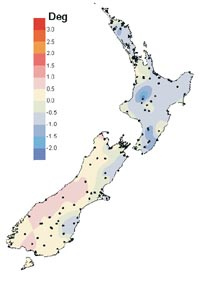 Difference from the average air temperature in degrees Celsius for April 2002. Click to enlarge.