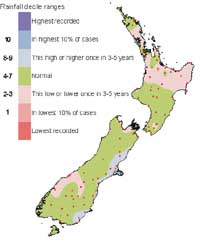 The Southern Oscillation Index (SOI) for April was -0.5, with the three month average at about -0.2. A weak to moderate El Niño is expected to develop by spring.

The Southern Oscillation Index (SOI), a measure of changes in the atmospheric pressures across the Pacific, smoothed over three months.

Signs remain in place that a weak to moderate El Niño may develop by spring (see the Climate Outlook). The best indication of the effect that might have on spring rainfall can be found in the historical record of previous El Niño springs. Rainfall observations at Sevenoaks, Marlborough, show that an El Niño spring in Marlborough tips the balance in favour of drier than normal conditions.

Rainfall in Marlborough during spring typically amounts to 150-200 mm across much of the region, with less along the coast, and over 300 mm in parts of the hill country.

At Sevenoaks the rainfall record indicates that spring rainfall is highly variable (see figure left). Notable in the data shown here is that the lower tercile spring rainfalls, shown in orange, occur across almost the full range of values of the SOI. Droughts in Marlborough are not confined to El Niño years, and have in fact occured three times in strong La Niña springs.

Rainfalls occuring during El Niño springs are shown in the figure below. The number of El Niño spring rainfalls occurring in the lower, middle, and upper terciles, is 5, 3 and 3 respectively, suggesting a 45% chance of drier than average conditions during an El Niño spring. The probability of above average rainfall is about 25%.

Note that one of the wettest springs since 1950, 1994, was also an El Niño year. This was in spite of the fact that conditions along the east coast of both the North and South Islands were drier than normal, as would be expected during an El Niño. This highlights the uncertainty of predicting rainfall patterns in El Niño years, because the typically wetter conditions in the west of the country in those years can spread at times into eastern regions. 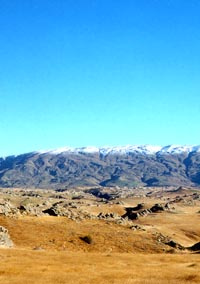