A dry, sunny start to autumn

March was dry, especially in the east, and sunny almost everywhere. Many eastern sites between Bay of Plenty and Otago recorded less then 50% of their usual March rainfall. Gisborne Airport recorded 12 mm and has recorded less than this only twice in 95 years. Rainfall was above average in parts of Auckland, Buller, Nelson Lakes, the Southern Alps, and coastal Southland.

Almost all New Zealand locations were sunnier than normal after a cloudy summer. It was especially sunny in Nelson and the east coast of the South Island. Christchurch equalled its sunniest March in more than 50 years.

Mild in the north and east

It was warmer than normal in Gisborne, Hawke’s Bay, northwest Nelson, and around Blenheim, and near normal elsewhere.

A severe rainstorm on 1 March produced 98 mm between 3.05 and 4.05 pm in Egmont Village, causing serious flooding and car accidents in North Taranaki. Inglewood recorded 59 mm between 3.15 and 4.15 pm on the same day. 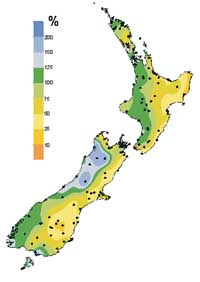 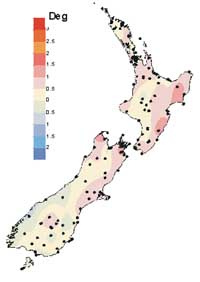 Difference from the average air temperature in degrees Celsius for March 2002. Click to enlarge.