The possibility of a return to El Niño conditions later this year has been strengthened by recent developments in the tropical Pacific (see the Climate Outlook on page 3). The best indication of the effect that El Niño might have on spring rainfall can be found in the historical record of previous El Niño springs. Here we look at Waikato spring rainfall as an example of how to use historical data to determine probable regional El Niño impacts.

About 260 to 320 mm of rainfall is typically recorded in lowland Waikato during spring, with higher falls in the hill country. At Morrinsville, in central Waitako, the average spring rainfall is 284 mm.

Morrinsville spring rainfall for all years since 1950 is shown in Figure 1 below. The data points are shown in orange, green, and blue to illustrate the lower, middle, and upper tercile rainfalls respectively (see caption). The vertical green dashed lines mark the boundaries of the tercile ranges.

Both the El Niño and La Niña phases of the El Niño-Southern Oscillation are associated with typical spring atmospheric circulation patterns over New Zealand. During El Niños there is a tendency for more southwesterlies than normal over the Waikato.

El Niño seasons are characterised by above- average sea surface temperatures in the equatorial Pacific Ocean, and by changes in atmospheric circulation patterns over the Pacific that can result in the Southern Oscillation Index (SOI) remaining about or less than -1 for periods of three months or longer (near or below the dashed red line in Figure 1).

The data in Figure 1 illustrate why forecasts of 2002 spring rainfall are best given in probabilistic terms. Of the 11 El Niño springs since 1950, only two resulted in upper tercile rainfalls at Morrinsville. These data suggest that the chance of above normal rainfall in central Waikato in an El Niño spring is less than 20%, while the probability of lower decile rainfall is greater than 50%.

Figure 2 shows El Niño spring rainfall anomaly patterns across the Waikato region. The centre map, showing the average anomaly, indicates that rainfall is likely to be near average in the west (95-105% of average), and that there is a tendency to below average rainfalls in the east (less than 85%). This tendency for lower than average rainfall in the east is reflected also in the spring rainfalls of both the driest and wettest El Niño springs, 1965 and 1994 respectively, and provides another clue as to how the spring rainfall pattern might evolve Spring rainfall at Morrinsville from 1950 to 2000. Data points are classified by colour into three equal groups (terciles). Tercile ranges for Morrinsville spring rainfalls are: lower tercile, 34 mm or more below average, orange; middle tercile, 33 mm below average to 32 mm above average, green; upper tercile, more than 32 mm above average. The mean three-month Southern Oscillation Index (SOI) is shown on the vertical axis. El Niños are considered to be strong when the three-month SOI is at or less than -1 (at or below dashed red line), and similarly, strong La Niñas occur when the SOI is +1 or more (at or above dashed blue line). El Niño springs are labelled. 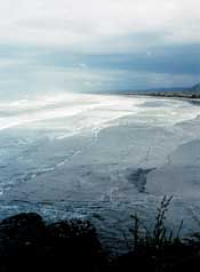