Geographic Information Systems (GIS) are hard to describe to everyone’s satisfaction. Definitions often depend on users' backgrounds and how they think, or on organisations' objectives in implementing the technology. GIS is a powerful tool in climate work because it provides a means of bringing together a whole range of climate analysis tasks that have historically been handled in separate steps.

New Zealand’s climate and weather monitoring stations have been set up over the years in places where there was convenient access, where the data were useful in meeting regional information needs, or at places where industries such as communications or transport needed the observations for operational purposes, for example at airports.

Sites were chosen so that the data recorded would be as representative as possible of the surrounding area. In areas where there were no observations, a reasonable guide to the climate had to be made by assuming that a climate gradient occured between adjacent observation points. For example, if one station averaged 100 mm of rain per month, and another 200, then locations in between might be expected to receive rainfalls somewhere between the two amounts, depending on the proximity of those locations to either station.

The use of computers allowed a range of spatial analysis methods to be more easily applied to estimate variations in the climate from one region to another.

However, as everyone knows, geographic features influence or force the weather, and therefore collectively the climate, to behave differently than it would if the earth were flat. Features such as altitude, aspect, slope, and the presence of mountains and valleys, all exert an influence on the resulting rainfall, temperature, and wind patterns.

Because we have climate observations at locations with various geographic features we have been able to build up conventions or paradigms on how these features typically influence climate. For example, we know that the windward side of a mountain range generally has higher rainfall than the lee side. Or that cold air flowing into low lying areas at night can replace warm air on valley floors, for example, thereby increasing the frost risk in low lying areas.

We know also that the sea has a modifying effect on air temperature, so distance from the sea is another important geographic feature, and that latitude is a factor in determining daylength, another important influence on climate.

GIS computing procedures enable us to integrate the spatial analysis methods and the typical geographic influences in systematic ways, something that had to be done manually in the past, process them rapidly, and produce easy to interpret maps, commonly called layers or coverages.

The methods can be varied to display different map outputs, for example, to give the 1 in 10 year low rainfall as well as the average rainfall. We can sample subsets of the data that help us to identify areas, or match them with selection criteria, e.g., where is the rainfall lower than 900 mm in places that have more than 350 hours of bright sunshine during summer?

We can also combine sets of information, e.g., climate data with cadastral data (which show features like roads and regional boundaries).

GIS layers often look so good that one can be tempted to assume that the picture says it all, but, of course, the final image can only be as good as the observational data underlying it and the methods used to analyse those data. Generally, getting these steps right is the biggest and most expensive stage in any GIS procedure. The resolution of the image, that is, how quickly the data vary with distance across the image, must be chosen so that there is no pretence that more precise information is being shown than is reasonable given the size and quality of the underlying data set. 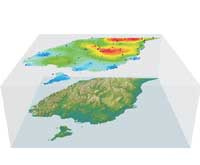 Trial chill unit accumulation map for southern New Zealand. Dots indicate temperature observation sites.The topographical map in the lower layer is given at a resolution of 250 metres. In the upper layer, chill unit summations have been estimated using both spatial and topographical procedures.

Chill unit accumulation is an index of the duration and intensity of dormancy in temperate climate crops. The most effective chilling air temperatures are between about 3° and 10 °C. Temperatures below 0 °C do not assist chilling, and at temperatures above 15 °C the chilling process is reversed. Map prepared by Jason Keys, NIWA. 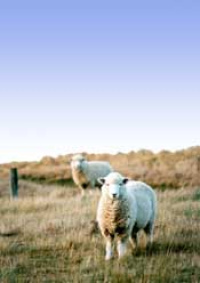 Wetter than normal conditions over summer in some areas have produced rank pasture growth, which combined with humid weather, provides favourable conditions for the development of facial eczema spores. (Photograph: Alan Blacklock)