Thunderstorms, lightning, torrential rain and localised flooding marked the start of the year. Hokitika recorded 481 lightning flashes on 2 January, and 937 flashes over the first four days of the year. A tornado uprooted trees on the Levin golf course on 4 January. Christchurch had hail up to 7.5 cm deep on 5 January. Westport was flooded on 3 January when up to 38 mm of rain fell in an hour. Wellington city centre was flooded on 10 January when 40 mm fell in 30 minutes. A severe storm on 12-13 January washed out bridges in Canterbury and closed SH1 in several places.

Wet in many areas

Eastern areas from Bay of Plenty to Canterbury had at least twice their normal rain. Kaikoura recorded more than 400% of normal January rainfall, while Christchurch had its wettest January since records began 135 years ago.

The west coast and much of Southland were warmer than normal. Temperatures were near normal in many other places, but below normal in inland Otago. The daily mean temperature in parts of Canterbury slipped from 5 °C above average at the beginning of the month to 5 °C below average a few days later.

January atmospheric circulation was dominated by higher than normal pressures to the south of New Zealand, with low pressures over the Tasman Sea and the North Island. This pattern helped to produce the heavy easterly rainfall, and the cloudy periods that occurred along the country’s east coasts. 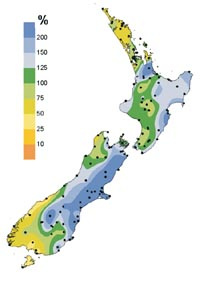 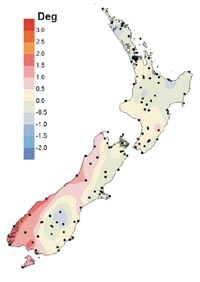 Difference from the average air temperature in degrees Celsius for January 2001. Click to enlarge.