The following is based on a statement prepared for the United Nations Interagency Task Force on Natural Disaster Reduction as a collaborative effort between the World Meteorological Organization and the International Research Institute for Climate Prediction (IRI), drawing also on contributions from regional climate authorities including NIWA. NIWA will continue to monitor the situation and, should an El Niño develop, will provide readers with information on possible impacts on New Zealand climate.

Climate patterns in the Pacific

Interactions between the atmosphere and ocean in the tropical belt of the Pacific Ocean modulate global weather and climate patterns. During El Niño events, for example, sea temperatures at the surface in the central and eastern tropical Pacific Ocean become substantially higher than normal.

During La Niña events, the sea surface temperatures in these regions become lower than normal. These temperature changes can drive major climate fluctuations around the globe, and, once initiated, such events can last for at least 12 months. The last El Niño event occurred during 1997–98 and was followed by a prolonged La Niña phase that extended from mid 1998 to early 2001.

Historical records show the approximate March-June period to be the most likely time for transitions to El Niño or La Niña.

Most expert interpretations indicate that it is still too early in the year for a confident El Niño outlook to be made for the remainder of 2002.

However, developments in the tropical Pacific are leading climate scientists to watch the situation very closely and to remain on alert.

Current conditions in the tropical Pacific are thought to be unlikely by themselves to trigger an El Niño, and further initiating signals will be watched for in the next few weeks and months.

Summary of the present situation

The El Niño–Southern Oscillation Index (SOI) is an indicator of the changes in pressure patterns across the Equatorial Pacific that occur as part of the development of El Niño (red curve) and La Niña (blue curve) conditions. The most recent La Niña phase ended in early 2001, with the SOI over the last few months hovering near neutral (far right of graph). 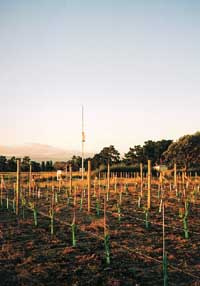