The outlook for January to March 2002

The El Niño-Southern Oscillation is in near neutral phase at present. Some climate models suggest El Niño-like conditions will develop in the equatorial Pacific over the next three to six months. However, past experience shows the predictability of El Niño development in the period leading up to Autumn is low. Sea-surface temperatures near New Zealand should remain above average through the summer, especially east of the country, which will make lower than normal air temperatures over the country unlikely (see outlook map probabilities below).

Large-scale atmospheric pressure patterns are likely to favour a more frequent than usual development of low pressure systems in the Tasman Sea, resulting in more northerlies than usual over New Zealand.

Rainfall totals over the three months as a whole are expected to trend towards above average in both western and eastern regions of the North Island, and to below average in the east of the South Island. Average rainfall is likely in other regions. 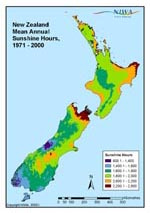