The year 2001 to 30 September was the driest January to September period of the past 30 years in many places (highlighted by the darkest shade of pink in the map below). 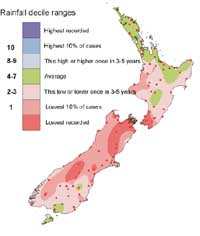 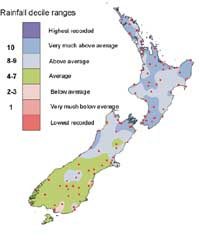 The climate of 2001 was highly variable and its extremes toppled some long standing records of adverse conditions. Drought and flood-causing rainfall, relatively warm months and a mid-winter freeze, extreme frosts, and hail stones the size of golf balls were elements of an ususual year.

The year featured a major shift in circulation from the predominance of higher than usual atmospheric pressures over the South Island for the first nine months of the year to periods of peristent, unusually low pressure over the Tasman Sea for the subsequent three months. For central regions of New Zealand, particularly Wellington and Marlborough, this brought a dramatic change from drought to rainfalls well in excess of seasonal averages.

The adjacent maps illustrate the transition from at least 30 year low rainfalls for January to September, to totals for October to December that exceeded 1 in 10 year highs. Lake Rotoiti in the north of the South Island, in the 30 year dry zone for the first part of the year, recorded its highest December rainfall (324 mm) since records began in 1933.

During seven of the first nine months of the year, as the drought progressed, many localities around the country had record low rainfalls for the month.

River flows filled hydro-electric lakes in November and December, which was a welcome change after low lake inflows for much of the year.

The 2001 national average temperature, calculated from 7 long term representative climate sites across the country, was 12.8 °C which was just 0.3 °C above the 1961–90 normal. Air temperatures were much higher than average in May, August, September, October and December, and January and July were both cooler than normal.

Air temperatures were 4.0 °C above average during the first two weeks of May, but, illustrative of the contrasting weather that characterised 2001 at times, the month ended with some severe screen frosts (e.g., Christchurch Airport, -5.3 °C) and some early winter snowfall.

July had the lowest mean air temperature for over 30 years. Hanmer Forest recorded 11 consecutive days when the air temperature at ground level dropped to lower than -10.0 °C. Water supplies froze in many South Island areas, and several small inland lakes and streams froze over for the first time in many years. In the North Island, the Ruapehu ski field reported its deepest snowfall in 20 years.

While central and southern New Zealand experienced months of relatively dry weather, the north of the country experienced frequent episodes of high rainfall, often with associated flooding. Rainfalls exceeding 100 mm in 24 hours were a common feature of the more severe events. Some eastern Bay of Plenty and Coromandel locations received record rainfall totals in each of February, April, and May. Leigh (north of Auckland) received 109 mm of rain in just one hour on 30 May, the highest recorded one hour rainfall at a New Zealand lowland site.

Outside the northern region, the most significant recorded heavy rainfall event of the year occurred in the Wellington and Hutt Valley area on 22 November. Most of the 50 to 100 mm of rain fell within 6 hours.

The highest gust speeds that were measured, at about 190 km/h or more, occurred in Cook Strait. Winds gusting to 170 km/hr caused damage in Otago Harbour in January. Wind gusts of about 140 km/h were sufficiently strong to cause damage to buildings and power lines in Wellington during January, Kaikoura in March, Tauranga in May, and across Auckland and Bay of Plenty during October.

The worst recorded hail storms of the year were in Masterton and Alexandra during January. In both places hail stones the size of golf balls caused severe damage to fruit crops.

Hail lay 4 cm deep in parts of Rangiora following a convectional storm during the afternoon of 28 December.

A more detailed summary of the climate of 2001 can be found at www.niwa.co.nz/ncc/cs/aclimsum_01 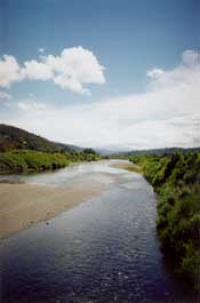 Hutt River in tranquil mode. Apart from a few exceptions, the average annual flows in New Zealand rivers during 2001 were well below normal. (Photograph: Alan Porteous)