Each summer in the Southern Hemisphere, ozone-depleted air spreads out from the Antarctic region and extends over much of New Zealand. Less ozone in our upper atmosphere, about 10–50 km above the Earth, means that more of the UV radiation that is present in sunlight will reach us, heightening the risk of sunburn and other biological and chemical damage. This summer’s UV radiation levels may be as high as ever.

The ozone hole: boom and burst

During the Southern Hemisphere winter, cold, relatively stable conditions develop above the South Pole region, allowing the formation of stratospheric clouds. On the surface of these clouds, when the sun returns to Antarctic skies towards the end of spring, chemical reactions involving chlorine compounds destroy ozone.

This ozone depleted air is initially confined to the Antarctic by the action of the strong winds – known as the polar vortex – that blow around the polar region. This mass of air, where ozone is thinner than it is elsewhere in the world, is commonly called the ozone “hole”.

During late spring and summer, the polar air warms up and starts to mix with air in mid latitude regions, including above New Zealand (below). This has the effect of diluting levels of available ozone over New Zealand, and allows more UV radiation to penetrate the atmosphere.

The Antarctic ozone hole has developed each year since the late 1970s. It was at that time that human induced damage to the Earth’s protective ozone layer started to become particularly noticable. The main culprit was the widespread use of chlorofluorocarbons (CFCs) since the 1940s. These compounds release chlorine atoms in the high atmosphere, which then react with the ozone and are its main destroying agent.

International agreements are now in place to minimise the use of some of these potentially ozone-destroying chemicals. As a result of these measures, the ozone layer should gradually recover to what it was like before human induced changes took place. However, this process will probably take many decades, and in the meantime we have to live with the higher than usual summer UV risk.

The signs are that the UV danger this coming summer is likely to be similar to last year. This is because ozone levels over New Zealand so far this year have been similar to last year. However, the break up of the polar vortex this year is expected in mid December, about a month later than last year, and this will increase the risk of low ozone and high UV over the summer. 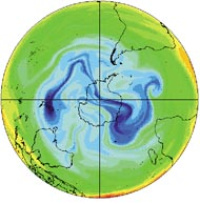 The Antarctic polar vortex, where the ozone hole is formed in winter, showing the process of summer break up. Blue 'swirls' of ozone depleated air spread out from the Antarctic over the Southern Hemisphere. This image, for 26 December 1998, was produced Brian Conner and Jelena Ajtic at NIWA, Lauder. 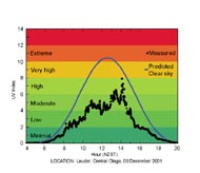 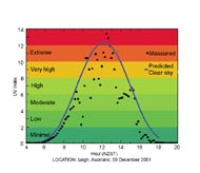 UV index for Lauder, Central Otago (left), and Leigh, north of Auckland (right), for 9 December 2001. The plots show the predicted clear sky radiation for this time of year (blue curve) and the measured values on this date (black dots). The Lauder observations show variable UV radiation levels during the day due to the blocking of radiation by passing thick clouds. The data at Leigh show partial blocking at times but generally high radiation during the middle part of the day 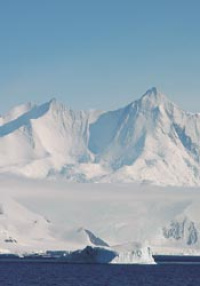 Clear sky above Mt Herschel (3,335 m), Antarctica. The extreme cold of the stratospheric air over the polar region aids the breakdown of ozone. (Photograph: John Mitchell)