Most of the North Island, Nelson, Marlborough, and east coast areas of the South Island from Kaikoura to Otago received average or above average rainfall, with double the normal rainfall in some places. In contrast the Southern Lakes area recorded half its normal rainfall. It was also drier than average in south Westland, Fiordland, and much of Southland.

Much of October's rainfall was from more frequent depressions than usual passing over the North Island. Pressures were above average to the south of the Chatham Islands. These acted to reduce the normal spring westerly winds and produced more frequent and mild northerlies over northern New Zealand, and northeasterlies over the remainder of the country.

Mild in many regions

The national average temperature for October of 13.4 °C was 1.3 °C above normal, making this the third warmest October on record since reliable measurements began in the 1860s. Warmer Octobers occurred in 1961 and 1893. Auckland and Hokitika had their warmest Octobers since records began in 1868 and 1866 respectively.

In contrast, in the northeast of the South Island, onshore northeasterlies kept mean temperatures close to average in north Canterbury, and up to 0.5 °C below average along the Kaikoura coast. 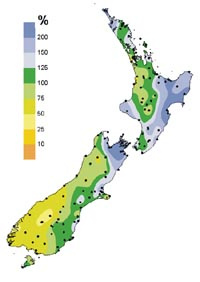 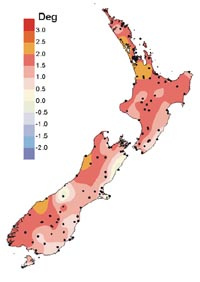 Difference from the average air temperature in degrees Celsius for October 2001. Click to enlarge.