Total New Zealand hydro lake inflows were lower than normal in October, adding another relatively dry month to a year so far of relatively low hydro lake recharge. Lakes right across the country have been affected, including the largest hydro lakes, Pukaki, Tekapo, and Taupo. Here we have selected the five driest years since 1979 and compared historical rainfall and inflow levels to the current year to show that 2001 has been exceptionally dry.

The amount of water stored upstream of New Zealand hydro electric dams is dependent on inflows, mainly from regular rainfall with a smaller contribution from snow melt in summer. Taking all the dams in the country as a whole, the inflow is generally higher during summer. This is because 60% of the total New Zealand inflow is in the Southern Lakes area of the South Island, where the summer six months is the wetter time of year.

The figure below illustrates this. The vertical bars represent 6-month totals of hydro lake inflows, shown in terms of the energy potential going into storage (GigaWatts). The bars show summer values from early November to early May (pale blue), and winter values from early May to early November (dark blue). Typically, the warm half-year inflows are larger than the inflows in the cooler part of the year.

Inflows to New Zealand hydro lakes are consistently reliable; the year to year variation in the semi-annual inflows in the graph is relatively small.

The inflow for the six months to 5 November 2001 was the lowest in the series shown (final bar highlighted by blue dots). Other low winter inflows (less than 2.5 GW, and similarly highlighted) have been used here as a basis for selecting relatively dry years from the historical record to compare with 2001.

For each of the calendar years with a winter drought as identified above, the total January to October rainfall is shown in the six maps below. Rainfall was below average over most of the South Island in all the years shown, and below average over much of the North Island in 1982, 1985, 1997, and 2001. The maps indicate that the dry conditions of 2001 have been more widespread and more severe than in the other years.

Rainfall Departures from average for 1 January to 31 October, for the 6 years between 1980 and 2001 which had the lowest winter hydro lake inflows.

Total annual inflows to all hydro lakes for the selected years are shown below. From a starting point of zero deficit on 1 January, each line represents the accumulated deficit of total inflow below its seasonal mean. The vertical axis indicates water quantity in terms of stored energy in TeraWatt hours. The graph shows how far the inflows for 2001 (black line) are below those of the 5 other driest years of the past 22. 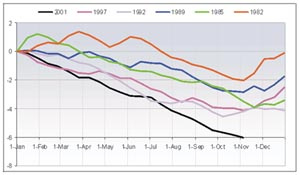 Hydro lake inflows are monitored in real time by flow gauges which are linked by telemetry to a web server that NIWA maintains for M-co, the administrator of the New Zealand Electricity Market (NZEM).

NZEM provides a free to air website containing a basic outline of electricity related hydrology at www.comitfree.co.nz. Subscriptions to detailed information about hydro lake inflows and storage are available from M-co on freephone 0800 323 323.

Rainfall Departures from average for 1 January to 31 October, for the 6 years between 1980 and 2001 which had the lowest winter hydro lake inflows. 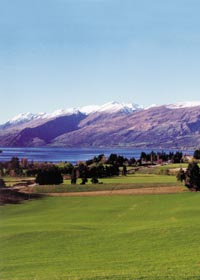 The winter snow line above Lake Wakatipu near Kingston. Snow melt is an important part of summer inflows to the southern lakes. (Photograph: David Turner)