September was a relatively benign month with more anticyclones and less wind than normal, and less extremes. Rainfall was lower than normal in many areas, especially in the west of the NorthIsland. Temperatures were above average in many North Island areas. The national average temperature of 10.5 ºC was 0.1 °C above the historical normal.

July to September: the climate we predicted and what happened 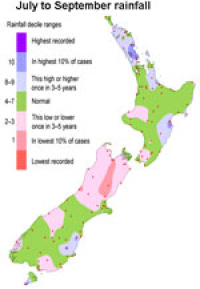 Predicted: Normal or above normal rainfall in the north and east of the North Island; normal elsewhere.

Outcome: Above normal in Northland and parts of Hawke’s Bay. Below normal in the northern half of the South Island. Normal in many other areas. 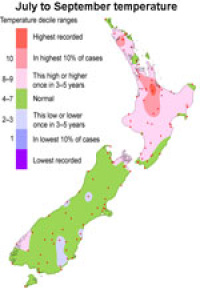 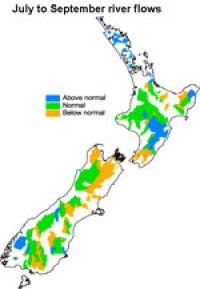 Predicted: Normal in most of the country, except for normal or below normal in the east of the South Island apart from Marlborough.

Outcome: Stream flows were below normal in Nelson-Marlborough and the South Island east coast, and mainly normal elsewhere.