Critter of the Week: a new species under our feet -update

This week we re-visit a recent blog featuring some new nematode worm species discovered at Hataitai beach in Wellington. One of them has recently been given its scientific name, Latronema whataitai, derived from the story of the two taniwha (sea monsters) who created Wellington Harbour.

While discovering new species can sometimes be a relatively easy affair, the process of describing and naming always takes some time. This is because we have to be sure that the new species is indeed different from all other species we know so far, which requires  a detailed description of its morphology based on measurements of body parts, drawings, and pictures using light and scanning electron microscopes. Increasingly, scientists also study the genetic make-up of species to provide more comprehensive information. All of these techniques were used by the nematode specialists Daniel Leduc (NIWA) and Zeng Zhao (Landcare) for describing and naming the new species Latronema whataitai from Hataitai beach. The resulting scientific article has recently been published online, accessible on the link below:

Latronema whataitai only measures about 1 millimetre, but close-up images show that it is a fierce-looking nematode species. It feeds on other nematodes using its large mouth equipped with 21 sharp teeth.

The species name (whataitai) was derived from Māori mythology. As summarised on the Te Ara encyclopedia online:

“Whātaitai and Ngake were sea taniwha who created Wellington Harbour. In tradition, the harbour was once a lake in which these taniwha lived. But Ngake was restless and smashed his way through to nearby Cook Strait. Whātaitai tried to get out a different way and became stranded on dry ground. It is said that his spirit took the form of a bird named Te Keo, which flew to the top of Wellington’s Mt Victoria and mourned (tangi), hence the name of the mountain, Tangi te keo.”

This species was named whataitai because of its impressive appearance, and also to acknowledge this character in local Māori mythology after which the Hataitai suburb of Wellington was named. At first sight, this specimen of Latronema whataitai, just under one millimetre in length, just looks like any other worm. [Daniel Leduc, NIWA] A closer look at the head of this Latronema whataitai specimen shows some relatively complex ornamentation consisting of bumps and ridges, as well as the presence of hairs, all of which are useful features for differentiating this new species from known species. [Daniel Leduc, NIWA] We can only appreciate how fierce this Latronema whataitai must look to its prey when looking at the mouth opening, which reveals numerous sharp teeth. Can you see the three larger and paler teeth above the other ones? They are an important feature distinguishing this species from other closely related ones. [Daniel Leduc, NIWA] 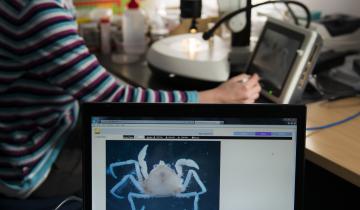 Critter of the Week: a new species under our feet -update